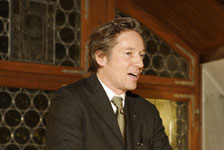 Until a couple of decades ago, “biological psychiatry”, Christoph Hock’s field of research and lecturing, was practically unknown. This changed when sophisticated physical methods were developed which could make the biochemical processes in the brain visible without mechanical procedures. Today it is possible to examine and understand not only everyday perception processes in a healthy brain, but also disorders like the ones occurring especially when suffering from dementia. This has opened up to new therapeutic possibilities.

As life expectancy rises, the number of people suffering from senile dementia is unfortunately also rises. Do we simply have to accept this? We do not, provided we utilize the progress that has been made for the benefit of dementia patients regarding the nature of their suffering. Christoph Hock has set himself this task.

His work reaches right down to the molecular level and demonstrates the complexity of brain processes, and hence also the causes of disorders like the ones that occur in Alzheimer’s disease. Treatment with medication and intensive social care may help to slow the spread of the disease, but it cannot be stopped. Thus it caused a sensation when Hock and his colleagues for the first time expressed the hope of being able to counter the disease with a vaccine. A first trial had to be curtailed, as a small proportion of the vaccinated patients fell ill with meningitis. Yet the fact that some of the patients who did not have adverse reactions are faring much better today than a non-immunised control group encourages efforts to continue down this promising path.

Christoph Hock has been head of the Department for Psychiatric Research since 1999, associate professor since 2001 and full professor for Biological Psychiatry at the University of Zurich’s Faculty of Medicine since 2006. He has gained a strong international reputation through his many years of research. The Swiss Alzheimer’s Association awarded him the 2004 Research Prize for his work.