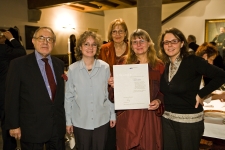 Switzerland has an efficient education system. Yet despite completing the compulsory years at school, one in ten Swiss citizens has difficulties with reading and writing. Rising requirements with regard to literacy skills are having increasingly serious implications for the everyday work and private lives of those affected. They may be able to read sentences, but are unable to grasp the meaning in context. When reading the package instructions on medications or filling out forms becomes an insurmountable obstacle, illiteracy – known as a limited ability to read and write – undermines the sufferer’s self-esteem, isolates them socially and, not least, ultimately represents an economic loss.

For 20 years, the association “Lire et Ecrire” has offered support to adults in the French-speaking part of Switzerland who struggle with literacy issues. Besides offering courses to those affected, it brings the issue to the attention of the public and policymakers through stands, petitions and a magazine written by its students, as well as sponsoring studies on the taboo subject of illiteracy. The dedication shown by “Lire et Ecrire” over many years is one of the reasons why the problem is better known in the French-speaking part of Switzerland than in other parts of the country.

Some 120 courses each year help people deal with their lack of literacy skills, learn how to better use computers or follow driving-school theory lessons. Subsidised by donations, course fees are deliberately kept low by “Lire et Ecrire”, since many of those in need of help are in low-paying jobs.

The “Lire et Ecrire” association was founded in Geneva in 1988. Today, anyone who is interested can find a suitable course at any one of 32 locations from Jura to Valais via Lake Geneva. The training of specialized teaching staff and the voluntary work in cultural and social areas are the cornerstones of the success that has made “Lire et Ecrire” a model for similar endeavours in the German-speaking part of Switzerland.