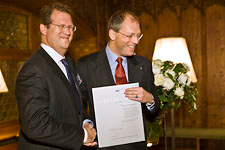 With artistic performances, games, fun and magic tricks, the hospital clowns of the Theodora Foundation transform children’s wards into a fantasy dreamworld, eclipsing for a moment the illness all around. Hospital clowns such as Dr. Pop Corn and Dr. Blumenwurz bring children laughter, opening a window to the outside world through which they can temporarily escape hospital life.

Right from the beginning, the hospital clowns – professional artists with special training – found there was a great demand for their services from both children and doctors and other hospital staff. Nowadays 43 clown doctors do their utmost to bring some cheer to around 65,000 young patients in Swiss hospitals.

The brothers André and Jan Poulie established the foundation in 1993 in memory of their mother Theodora. André spent a lengthy period in hospital as a child after a serious accident and it was his mother’s sense of humour and spontaneity that brightened his days and took his mind off things. Both brothers know from their own experience that a stay in hospital is difficult for a child. Taken away from their family and friends, they suddenly find themselves in unfamiliar and often sombre surroundings. This is where the hospital clowns come in. They try to include each and every child in their visits. They show compassion, listen to them and demonstrate great emotional strength.

In addition to the clown doctors, the Theodora Foundation also runs other programmes such as “Herr und Frau Traum” (Mr and Mrs Dream), who look after disabled children, and “Professor Nutrus”, who gets across the message about healthy eating in a fun way. In 1995 the foundation was recognised for its contribution to the public good. Following its tremendous success, foundations have been set up in nine different countries using the same name and the same philosophy as the original foundation in Switzerland. The Theodora Foundation was awarded the Adele Duttweiler Prize in 2006.