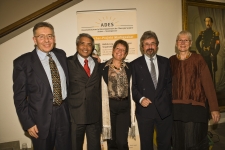 Eighty percent of the timber felled in Madagascar is used by the indigenous population for cooking food on open fires. Rapid population growth and progressive deforestation have reduced the forest to just ten percent of its original size, with large sections of the island now desolate. A unique natural paradise and the habitat of many predominantly rare species of plants and animals are under threat.

In 2001, Regula Ochsner from Switzerland founded the non-profit association ADES (Association pour le Développement de l’Energie Solaire Suisse-Madagascar) with the primary aim of making a contribution to the preservation of Madagascar’s biodiversity, but at the same time giving the impoverished population of the South of the island an affordable alternative to traditional cooking methods. Madagascan families spend on average a third of their income on firewood or charcoal. Therefore, ADES encourages the use of renewable energies, especially solar energy.

Since its founding, the organisation has reached a high magnitude of awareness in Madagascar. Using mainly locally sourced materials and indigenous craftsmen, ADES manufactures low-tech solar cookers at its three carpenters’ workshops in Tulear, Ejeda and Morondava, which are powered to a large extent by wind and solar energy. Over 3500 cookers have been sold to date, saving 4500 hectares of woodland from destruction each year.

Through cooking demonstrations and courses, ADES continuously strives towards heightening Madagascans’ awareness of the benefits of cooking without wood in particular and of environmental issues in general. Thanks to newly developed didactic and methodological teaching materials, environmental education is also becoming ever more widespread in schools, in close cooperation with local NGOs.

Today, ADES employs 32 people in Madagascar. The association is working closely with Madagascan and international environmental and government organisations. Also, a pilot project to provide electrification to a fisher village is currently in progress. In 2007, the association was awarded the Swiss Solar Prize.