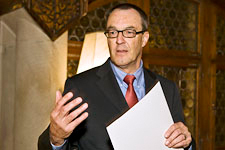 Encouraging children and young people to read, stimulating their imaginations and support their creativity has been a key objective of the Swiss Foundation of Publications for Young People (Schweizerisches Jugendschriftenwerk – SJW) since 1931. Teachers from various organizations founded the SJW to keep in check the widespread literature of the German Reich. SJW texts or “SJW-Hefte,” as they arecommonly known, aimed to encourage young Swiss people to read by providing them with interesting, educational and reasonably-priced reading material.

Today the SJW is no longer concerned with the intellectual defence of the nation, but it continues to focus on the interests and needs of young readers. SJW¬ texts were already being published on contemporary issues such as ecology and the protection of the environment in the 1970s. A special series was dedicated to immigration and race issues. Publications on addiction, sexuality and sects were all well read in schools despite initial heated debate. The SJW surprised at the end of the 1980s by bringing out its first comic.

The publishing house has a unique sales network. SJW sales representatives – mainly teachers – take the latest range of publications around the schools every year and handle the orders. Popular “SJW” lessons are regularly held in many schools. The books are made available in all of Switzerland’s language areas and reach almost all local school communities.

The SJW has always aimed to meet the needs of the speakers of all of Switzerland’s different languages. The first French-language publication appeared way back in 1935. Translations were then made available first in Italian and later in Romansch. The publishing house now also offers interactive reading on CD in various languages of Switzerland’s immigrant communities.

To date, the SJW has published around 2,300 titles in the four national languages, totalling 50 million books. The SJW celebrated its 75th anniversary last year. With innovative programmes and various activities, such as touring exhibitions, the publishing house plans in future to also step up its efforts outside the schools to reach a broader public.